In honor of our dearly beloved friend, Dr Sal Caputo, who passed away Sunday, August 6, 2017, I wrote this song and sang it at his funeral. I will have the recorded version up on my site as soon as is practical. Sal will always be in our minds and hearts.

A selfless man he was for sure

Healing all who came

A loving father and husband too

He will always remain

He’s resting in a better place

With the good Lord by his side

We shed a tear and mourn for him

-He’ll always be around…

"...Jerry DeMeo, with his multifaceted personality, brings to the table of any concert goer, not only great singing and original songs, but he's like having a relative perform at your table. He's both witty and funny, and he brings a friend and family milieu to any venue that he performs at..."
Michael "Eppy" Epstein
-Partner at Road Warrior Entertainment, New York, N.Y.
-Owner/Operator of My Father's Place, Roslyn, N.Y.
-Long Island Music Hall of Fame Inductee


***CD NEWS UPDATE: Jerry's debut CD is…"served up acoustic, seasoned with spicy electric... "Headin' East Headin' West" is a little bit country, a taste of rhythm and blues, throw in a bossa and you have this delicious stew."
You can preview it and purchase downloads or the physical CD on the MUSIC tab. "Headin' East  Headin' West" is also available on ITunes, CD Baby, Amazon and many other fine music distributers.
In addition, there is a FREE download of a new song, "A Fifth of You". Feel free to share the tune with friends.
***RADIO INTERVIEWS: On Friday, May 2, 2014, Michael Mand interviewed Jerry on his show, the St. James infirmary, at www.owwrny.org, SUNY College at Old Westbury web radio, Westbury, N.Y. They played tracks from "Headin East  Headin West", and some previously unrecorded songs. The broadcast is available at www.stjamesinfirmary.net. On Sunday, February 2, 2014, on WLRN 91.3 FM, Miami, Fla., Michael Stock interviewed Jerry and he played songs from his new CD. If you missed the interview, you can hear a portion of it on the VIDEOS tab. Sunday, September 8, 2013, Jon Stein interviewed Jerry on WTBQ 93.5 FM, Warwick, NY., and played tracks from Jerry's new album, live and recorded. You can hear the show anytime @www.wtbq.com Hootenany Cafe podcasts.
***RADIO PLAY:  While Jerry's radio plays are too numerous to list, here is a small sampling of spins: On Sunday, November 3, 2013, John Platt of WFUV 90.7 FM, Bronx, NY, played "Springtime in New York" from "Headin' East Headin' West". To hear the spot, go to www.wfuv.org, Archives, The Sunday Breakfast, 11/3/13. Jerry was the featured artist on Jon Stein's show, Sunday, June 16, 8pm on WTBQ 93.5FM, Warwick, NY and streaming live at www.wtbq.com. Jon played selected tracks from "Headin' East  Headin' West". The podcast of the show is available @ www.wtbq.com. Nick Noble from WICN 90.5 FM, Worchester, MA spun one of Jerry's tunes, "Leavin' In The Morning", Thursday, June 6, 2013.  Sunday, March 10, 2013 on WUSB 90.1 FM, Stonybrook, N.Y., Mary Lamont played the song "Investment Analysis Blues" from Jerry's album. To hear the spot, go to www.marylamont.com, Mary's Radio Show, 3/10/13 MP3. The track can be found at 48:20.
In addition, songs from Jerry' CD can now be heard on Jango Internet radio @ www.jango.com/music/jerrydemeo , Spotify @ www.spotify.com, Pandora and most other streaming internet radio stations.

***PERFORMANCE HIGHLIGHTS: Jerry keeps an active performance schedule. In addition to his solo shows, in 2012 he shared the stage with Aztec Two Step and Jim Dawson in August, Frank Carillo and Peppy Castro (Barnaby Bye) in early November and The Funk Filharmonik in late November. In 2013, Jerry performed with Jackie Martling, Soul Be It and Consuelo Vanderbilt Costin in May and he opened for Toby Walker in November. In January 2014, he was invited to perform at the CanadaFest in Hollywood, Florida. After having such a wonderful time in the Fall of 2013 Jerry once again shared the stage with Toby Walker in September, 2014, at Page One in Glen Cove. Jerry had been in invited back to perform at the CanadaFest in Hollywood, Florida, in January, 2017. He looks forward to continued collaborations in 2022, supporting "Headin' East Headin' West".
2014 was a special musical year because of the inauguration of The DeMeo Brothers Band. After three successful SRO performances, The Brothers continued their 2015-2016 tour, with shows in New York City and on Fire Island. Stay tuned for future dates in 2023.

Jerry is currently booking 2023 shows in the Northeast, and Winter 2023 shows in Florida. In addition, he does the booking for the DeMeo Brothers Band. Please see the separate Band tab above. Select upcoming public performances are listed below. By joining his email list and friending him on Facebook, you will be kept apprised of new bookings and progress on his and the Band's future recording and video projects.
Jerry is available for private concerts, corporate events and festivals. Solo, duo, or the full band will be provided as required.
Jerry DeMeo is available on YouTube. Simply go to the VIDEOS tab above, or to Jerry DeMeo on YouTube.

When not performing on stage, playing and writing music, or managing, developing and mentoring other artists, Jerry spends his time as a Senior Vice President/Senior Portfolio Manager at a global wealth management firm.
ubs.com/team/lgw
linkedin.com/jerrydemeo

...and so The Lasagna Tour continues….

Jerry returns to one of his favorite venues; playing on the Dock at sunset. Join him as he pulls out some chestnuts, and some new material from his next album...

Stay tuned for 2021 Winter tour dates in Sunny South Florida and beyond...

Due to these difficult times all live shows have been postponed until further notice. We will try to do some online performances. Please stay healthy and safe.

In addition to The Shack in Atlantique, Fire Island, stay tuned for additional Summer shows on Fire Island.

Zen Mystery is a cozy South Florida concert venue that I thoroughly enjoy playing. We always have a great time here. Dennis is a wonderful host. See you there !!

Stay tuned for Florida Winter dates coming soon. If you are not currently on our mailing list, please send us your email address and location so that we can notify you shows in your area. Thanks

I am honored to be opening for the wonderful Ronald Reggae Band.

Jerry will be playing various shows at The Shack in the Summer of 2018. Stay tuned for specifics. 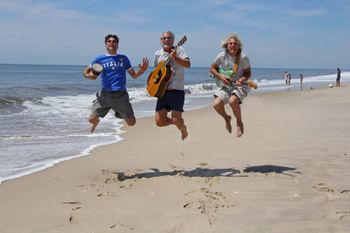